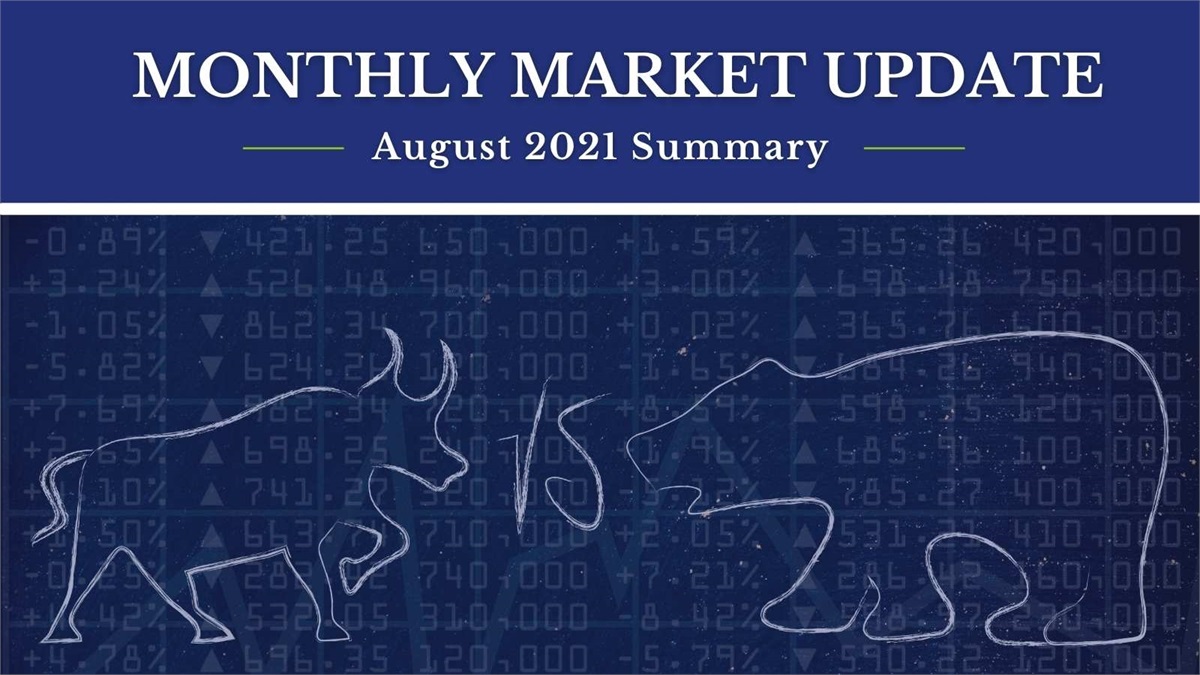 Global Markets Up for August

For the month of August:

So far in 2021, the markets have turned in excellent performance, as all of them are in double–digit YTD territory. And the records that have been broken so far in 2021 are nothing short of remarkable. Consider:

Volatility, as measured by the VIX, trended down in August, although there were a couple of spikes mid–month as it came to rest slightly over 16.

West Texas Intermediate crude also trended down in August, ending the month at $67.50/barrel, for a monthly loss of a about $3.75/barrel. For perspective, WTI started the year at just about $48/barrel.

Market Performance Around the World

For the month of August, sector performance was mostly positive, as 10 of the 11 sectors ended the month green, with the volatile Energy sector being the only one in the red, as it lost more than 2% on the heels of last month's large negative return.

In addition, as has been the case for some time, the range in sector–returns was wide, with Financials up 5% and Energy down more than 2%. And unpacking the various sector returns further, we can almost detect another mini–sector rotation emerging, as Financials jumped to the front of the pack after sitting towards the rear of the pack for the previous month.

Here are the sector returns for the month of August as well as July (two very short time–periods): 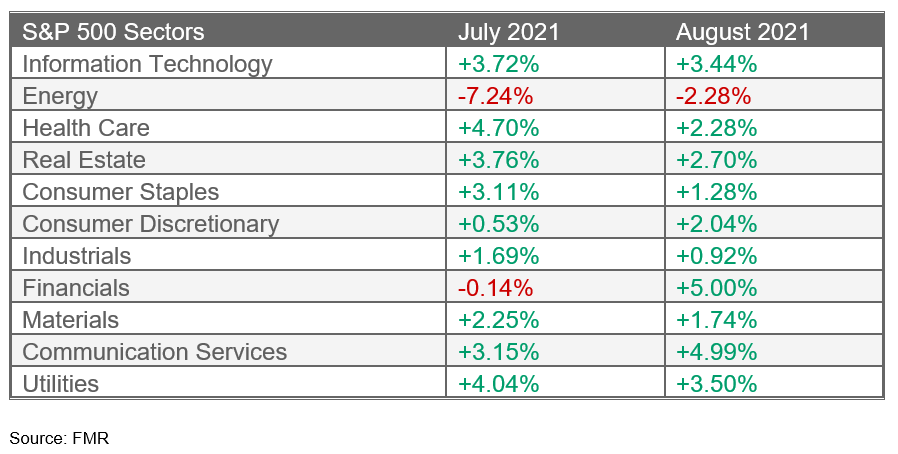 On the last day in August, the Conference Board reported that its Consumer Confidence declined in August, after falling in July. As of August 31st, the Index is at 113.8 (1985=100), which is down significantly from 125.1 in July.

Further, it was reported that:

Said Lynn Franco, Senior Director of Economic Indicators at The Conference Board. “Concerns about the Delta variant and, to a lesser degree, rising gas and food prices – resulted in a less favorable view of current economic conditions and short–term growth prospects. Spending intentions for homes, autos, and major appliances all cooled somewhat; however, the percentage of consumers intending to take a vacation in the next six months continued to climb.” 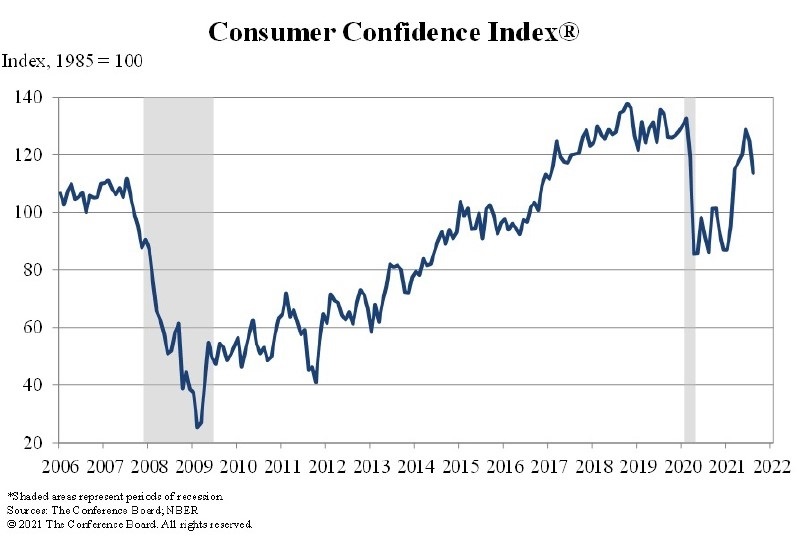 Consumers were less upbeat about their short–term financial prospects.

On August 26th, the Bureau of Economic Analysis reported that real gross domestic product (GDP) increased at an annual rate of 6.6% in the second quarter of 2021.

Here is an explanation of the recent increase in GDP from the Bureau of Economic Analysis:

The increase in PCE reflected increases in services (led by food services and accommodations) and goods (led by “other” nondurable goods, notably pharmaceutical products, as well as clothing and footwear). The increase in nonresidential fixed investment reflected increases in intellectual property products (led by research and development as well as software) and equipment (led by transportation equipment). The increase in exports reflected an increase in goods (led by nonautomotive capital goods) and services (led by travel). The decrease in private inventory investment was led by a decrease in retail trade inventories. The decrease in federal government spending primarily reflected a decrease in nondefense spending on intermediate goods and services. In the second quarter, nondefense services decreased as the processing and administration of Paycheck Protection Program loan applications by banks on behalf of the federal government declined.”

The U.S. Census Bureau and the U.S. Department of Housing and Urban Development distributed two press releases within a week of one another and when reviewed together, they paint a confusing picture. To summarize: building permits are up, housing starts are down, housing completions are up – and sales of new single–family homes were down a staggering 27.2% relative to this time last year.

On August 18th, it was reported that:

Building Permits Were Up in July 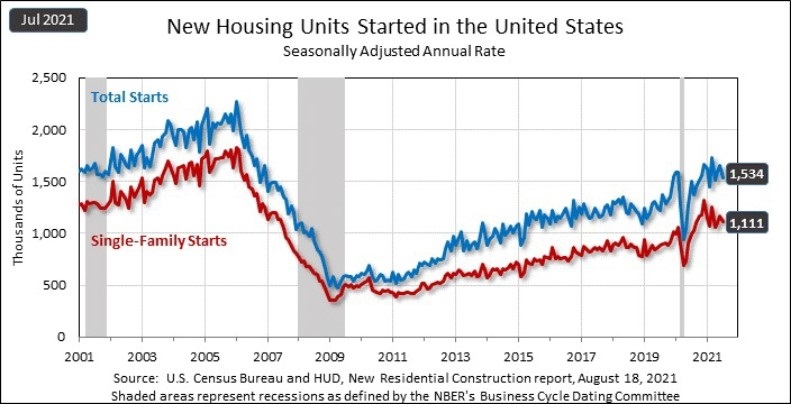 Housing Starts Were Down in July

Housing Completions Up in July

Then on August 24th, it was reported that: 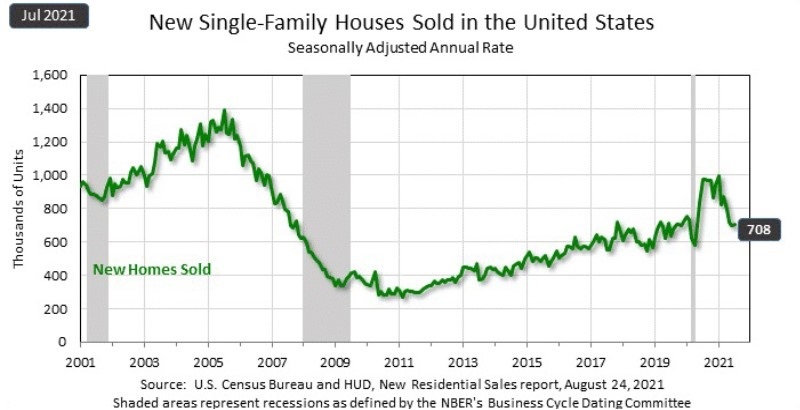 Consumer Price Index Up in July

Mid-way through the month, the Bureau of Labor Statistics reported that the Consumer Price Index increased 5.4% over the past 12 months. Surprisingly, media outlets ran with headlines like these: “Inflation is Not as Bad as Feared” and “Inflation Fears Moderate” and even this one: “Core Inflation Starts to Ease.”

And while it's technically true that inflation “only” rose 0.5% in July after rising 0.9% in June – and having risen every month so far in 2021 – keep in mind that an increase of 0.5% every month is going to bring annual inflation north of 6%.

Here are a few of the more troublesome inflation numbers – over the past 12 months: 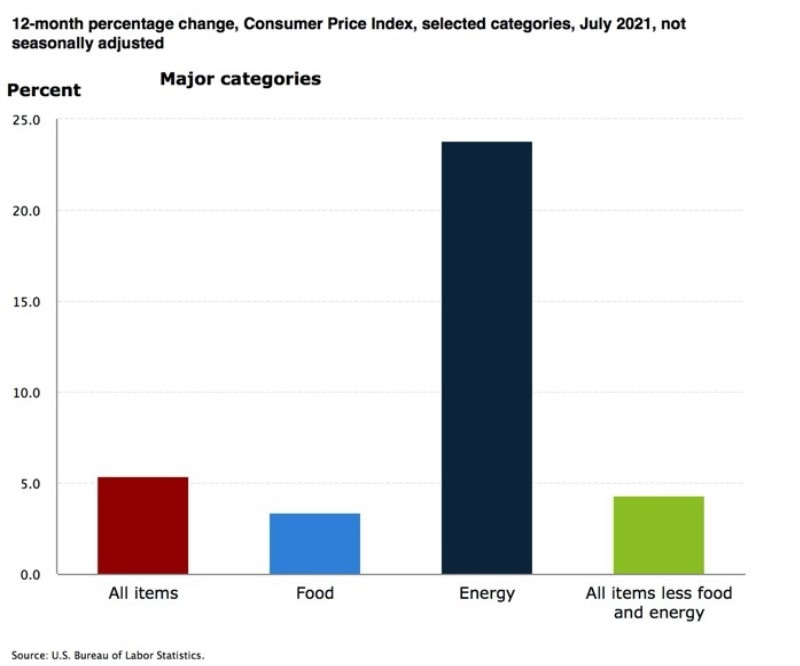 Keeping with the inflation theme, the BLS also reported that the Producer Price Index increased 1.0% in July, after moving up 1% in June and 0.8% in May. Maybe more startling was the fact that the final demand index moved up 7.8% for the 12 months ended in July, the largest advance since 12–month data were first calculated in November 2010. 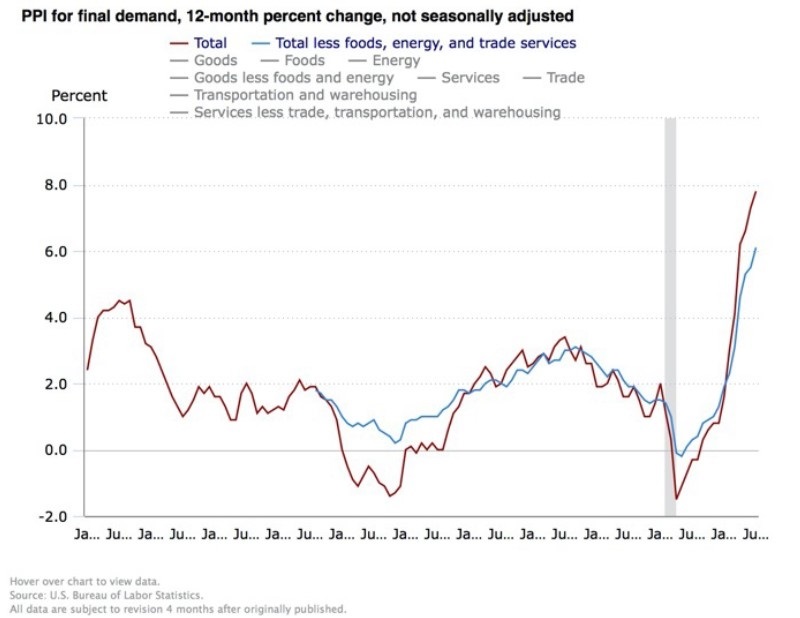 The National Federation of Independent Businesses reported that “the NFIB Small Business Optimism Index decreased in July to 99.7, a decrease of 2.8 points, reversing June's 2.9-point gain. Six of the 10 components declined, three improved, and one was unchanged. The NFIB Uncertainty Index decreased seven points to 76, indicating owners' views are held with more certainty than in earlier months.

Other key findings include:

As reported in the NFIB's monthly jobs report, 49% of owners reported job openings that could not be filled, a 48–year record high. Owners' plans to fill open positions remain at record high levels, with a seasonally adjusted net 27% planning to create new jobs in the next three months, down one point from June's record high reading.”

While there are lots of data points that can lead to declining optimism, inflation is one of them as the NFIB's report found that:

Maybe a silver lining (depending on your perspective of course) is the fact that a net 38% of owners (seasonally adjusted) reported raising compensation, down one point from June's record high of 39%.

Plus, a net 27% plan to raise compensation in the next three months, up one point from June and a 48–year record high reading.

Before the stock markets closed out the month, a lot of media outlets were picking up a summary that suggested the remaining four months of the year are likely to be positive.

More specifically, as the chart below shows (it's not through the technical end of the month, but it's very close), the last five times that the S&P 500 rose more than 15% (going back to 1954), investors were rewarded with positive performance for the remainder of the year 4 times.

But that one year it didn't hold true was painful. 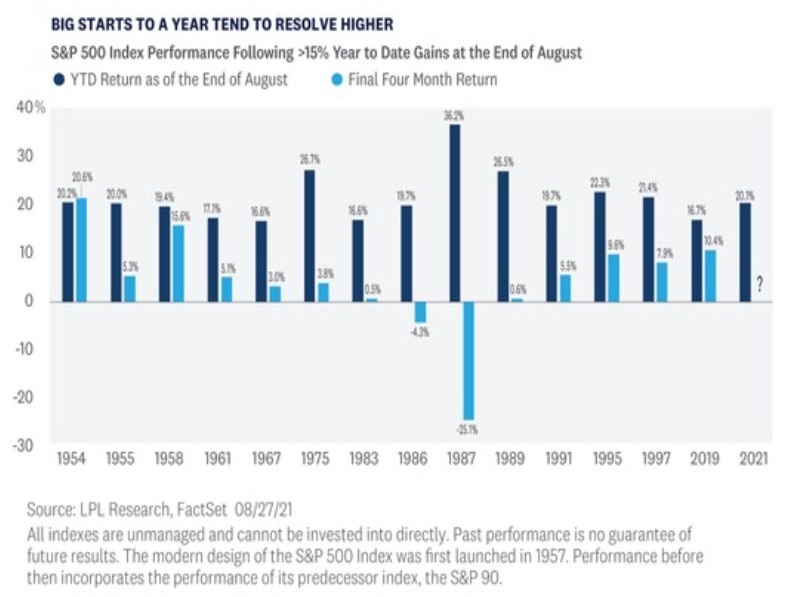 Of course past performance is no guarantee of future results.

But Wall Street and Main Street can remain optimistic.

Nothing contained herein shall constitute an offer to sell or solicitation of an offer to buy any security. Material in this publication is original or from published sources and is believed to be accurate. However, we do not guarantee the accuracy or timeliness of such information and assume no liability for any resulting damages. Readers are cautioned to consult their own tax and investment professionals with regard to their specific situations.